So how did I come to write librettos in the first place? Again, it began with Goodnight Mister Tom. After it was published, my theatre agent Bill Horne said, ‘this book would make a musical.’

‘It would be made too sentimental,’ I protested.

The plan was for me to write the Book of the musical and then to send it to a composer who was working in the West End at the time, as was the man who was to write the lyrics. After I had done so, a friend offered to deliver it to his address to save me having to make a trip to the post office, as I was busy looking after my older son who was a baby at the time.

Weeks and months passed by with no response. It was only many years later after the musical had been performed under a different composer that I bumped into him. He asked me why I hadn’t sent it to him, and that is when I discovered that the person who had offered to deliver it, never did.

However, while I had been waiting to hear from him, lyrics were pouring out of my head.  I suppose it was because I knew the characters so well that they seemed to write them for me. An opera singer friend, Fiona Kimm, hearing that I still had heard nothing suggested I contact a composer she knew called Gary Carpenter. We met, hit it off and in 1992 the musical version of Goodnight Mister Tom was one of the winners at the Quest Fest for new musicals at Buxton Opera House where it was first performed. It was immediately snapped up by The Wolsey Theatre in Ipswich and was later performed in Manchester in a production directed by Roger Haines and choreographed by Bill Deamer. It had wonderful reviews and the audiences loved it. They even cheered after some of the numbers, especially when Zach had managed to persuade the villagers to join him in a song and dance number. 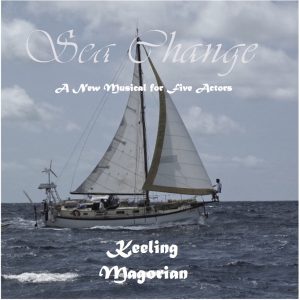 It was after I had written the libretto for Goodnight Mister Tom that I began to write Sea Change, a musical about four strangers who book a week’s sailing holiday during the last week of the sailing season. The skipper, an ex-navy man, is faced with a mixed ability crew who normally would not spend five minutes in each other’s company. A shocking incident forces them to talk to one another with dramatic and humorous results.

Once the composer Stephen Keeling and I had enough songs written, he recorded some and put them onto a CD. It was this recording which led me to write TINSEL. Up until then, I had taken it as read that writing lyrics on the subject of love was my weakest area so was flabbergasted when the song people liked the most was about two people who are stunned when they realise they have fallen in love with one another but accept it is not to be and must hide their feelings. It is sometimes very easy to believe something about oneself which isn’t true so I decided to give myself a challenge and write the lyrics for twenty songs on the subject of relationships. A friend allowed me use a room in her house near the nursery school where my younger son spent the mornings so that I could do so. One of the songs, Wallflower expressed the thoughts of a woman standing alone watching her fellow office workers at the Christmas Office party. Her only companion was the plate of canapes in her hands. It was then that I realised that the other songs I had written were sung by the people she was observing.

By now I had moved house after my divorce only to find that the primary state schools in and around the area were full which meant it was home education or no education for my younger son, George. Also, because the television adaptation of Goodnight Mister Tom had won so many awards I had many letters to answer and schools were inviting me to give talks which I did, accompanied by George until he was ten years old. During these visits I would sometimes ask if someone would be willing to teach him computer skills. When I finally bought a computer and a kind neighbour fixed a table like shelf under the slanting ceiling in the cupboard under the stairs and plugged it in for me, I asked George to teach me how to use it. I then had to learn how to type. By this time, I had discovered he was musical and that half the schools had cut music from their curriculum. Several teachers told me not to send him to school.

Although this left me no time to write a new novel, writing lyrics for the office party musical was perfect. However, I didn’t have a composer for it. And then I had an extraordinary stroke of luck. A man called Chris Grady had organised an event in London where Book Writers, Lyricists and Composers could meet one another. While a friend looked after my younger son, I headed towards it armed with lyrics. When I arrived, Chris told me that there was a Canadian composer who had been working in Europe and was looking for a lyricist. Hearing of the conference he had decided to stop briefly in London on the way back to Canada so that he could attend it. Chris took me to the table where he was sitting and introduced us to one another. I slid the lyrics in his direction and after reading them he smiled. His name was Robert Buckley.

The next morning, he rang me. He had written the music for one of the songs already and could he travel down to where I lived to play it to me? My piano was still in storage along with other unpacked belongings. However, I had heard that a neighbour who lived two doors away had one. I knocked on her door, explained the situation to her, fully expecting her to refuse my request for two complete strangers to visit her home and allow one of them to play her piano. Instead, she welcomed me in.

The musical follows a group of office workers on the night of the annual Christmas Office Party, the hours leading up to it, the party itself and the morning after the night before.  It became one of two musicals I had written the libretto for, to be showcased at Greenwich Theatre. At the time it was called Canapes for Company which we later changed to TINSEL.

Later, it was scheduled to go into Jermyn Street Theatre but as the date approached, the director suddenly walked out on us. I was in Buxton at the time, performing at a festival in the evenings and looking after my sons during the day. All I could do was to call every member of the cast and cancel it, as there was no way I could find a new director in time. It was devastating.

However, there is an old Chinese saying, sometimes not getting what you want can be a wonderful stroke of luck. By putting it aside for a few years I was able to go back to it and do some more work on it.

The second musical which had been chosen to be showcased at the Greenwich Theatre was Hello Life! 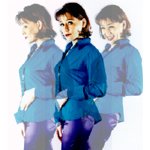 Earlier, Heather Cairncross, an old friend and a fantastic singer, and my website and Facebook maestra, called and asked me what I was doing. I told her I was writing lyrics for a musical. She asked if I would write some lyrics for her as there was a wonderful Jazz pianist and composer she knew called Alexander L’Estrange.

I wrote the lyrics for a couple of songs. Soon she was on the phone again asking me for more, as he had already written the music for the ones I had sent her. As I continued to write them, I suddenly became aware that a theme was emerging and that they could be the lyrics for a one-woman jazz musical. Heather and I decided to work on the book together, using our experiences as a base for the story. Heather had two sisters who kept encouraging her to go on dates, sometimes even organising them for her. I was a newly divorced woman with two young sons.

It was then that I had to accept that being a solo parent with most of my relatives deceased or living miles away, made it impossible for me to work on musicals without child care as it would also involve too many meetings and rehearsals. Somehow, I needed to find a way of writing another novel alongside home educating my younger son, taking him to activities where he could meet other children, spend time with my older son and answer letters.

One night, unable to sleep, my head whirling, I suddenly saw an image of an old cinema.

Back Home To Be Serialised On BBC Radio 4 Extra

The Book Of Hopes