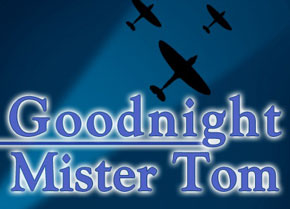 For those wishing to order a copy of the libretto:
Faber Music Distribution
Tel: 01279 828989
Email Faber Music

For amateur companies who are interested in putting on a production of the musical:

A musical version of Michelle Magorian’s award-winning book, regarded as a modern classic. It is the story of William Beech, an artistically-gifted but abused young boy who escapes his brutal home life when he is evacuated to the countryside during World War II. He is ultimately rescued from his hideous upbringing when he is taken into the care of Mister Tom, a lonely old man. With Gary Carpenter’s soaring, tuneful score and Michelle Magorian’s beautiful lyrics, this is a wonderful, ultimately uplifting show which will appeal to young and old alike.

When the novel Goodnight Mister Tom by Michelle Magorian was first published to impressive reviews, winning three Literary Awards in Britain, America and Australia, Mikki Magorian (as she was known in the theatre) was performing in a musical.

The libretto and score of a musical version was published by Josef Weinberger while Michelle Magorian and the composer (Gary Carpenter) were having their new musicals showcased at the Greenwich Theatre as part of the New Musicals Futures Festival.

Click on the Orange arrow to listen to some of the songs:

“One of the songs Picture Lullaby is sung by an actor called Nigel Richards who asked Gary Carpenter if he could sing it because he liked it so much. But in the musical, it is sung by Will when he is holding his baby sister in his arms.  It was while Gary and I were working on the musical, that Gary said, ‘I think he should sing her a lullaby.’ So I asked myself what sort of lullaby would Will sing to her? And then I knew. Will loved to draw and paint.
In PICTURE LULLABY he tells her about all pictures he is going to paint for her.”

MELTING MISTER TOM
“A touching story and a delightful show. For some reason the word has got out about that this is a show for children. Not so. It will please all ages.” Evening Star – Ipswich

“tender and humorous, with an extremely serious undercurrent…
the music by Gary Carpenter is evocative.  All in all, Goodnight Mister Tom, with its social and historical relevance, makes a change from a lot of the more fatuous productions around at the moment and is an unforgettable night out.”

The cast of Manchester Library Theatre Production
“With its theme of loneliness, madness and child abuse, this wouldn’t appear to be the most obvious choice for a musical, yet Michelle Magorian handles her subject matter with care and sensitivity, never tripping over into preachiness. The songs themselves are lively and droll, more Sondheim than Lloyd Webber. And who could resist a line like, ” We don’t want you to sit with us, you’ve got a face like oozy pus.
Roger Haines has a way with children and gets strong performances from his mainly young cast. Praise also to George Little as Mister Tom and Marilyn Cutts managing to inject some sympathy into the thankless role of Mrs Beech. The ending is a blub-fest of mammoth proportions guaranteed to melt the coldest heart. For a sentimental old puff like me, it was all too much. A wonderful production.”

Goodnight Mister Tom is perfect for amateur productions too!

Quotes from one of the Amateur Companies

“The script is wonderful and is working its magic on everyone, particularly our seasoned performers who are bowled over by the humour and sadness. We are performing the show in a small community theatre using a composite set and have a cast of over 40.We have been overwhelmed by the response of everyone to whom we have said that put next production is Goodnight Mister Tom.”

“The audience reaction is still continuing; we have been absolutely bowled over by the e-mails and letters. The reaction is quite unprecedented. From the moment I read the script and played some of the music I was absolutely sure about GMT. It was hard work, true, but for the cast and everyone involved it has been a truly ‘life enhancing’ experience. A friend, whom I had always considered a real macho man devoid of emotion, sent me this e-mail: Even I was holding back the tears.”

The History of the Musical

At the time of the novel’s publication, Magorian’s Theatre Agent, Bill Horne, declared, “This will make a wonderful musical and you must write the book”

A meeting with an actor/lyric writer and a composer took place and Magorian wrote the first draft. Both men were involved in West End Musicals and heavily committed. While Magorian waited for them to write, she was waking up in the night with lyrics pouring out of her head and feeling guilty that she was writing them when she was only supposed to be writing the book. And still she waited.

The singer Fiona Kimm, decided to take matters in hand and arranged a meeting between her and the composer, Gary Carpenter. Magorian pushed her lyrics across the table. Gary read them and said “You can write lyrics.” And the collaboration began.

Fast forward to Spring 1992 and the Quest Fest for New Musicals at the Buxton Opera House. This was an extraordinary event and the brainchild of Chris Grady.

Rather than invest a huge sum of money to back one winner’s production, money was spread between five winners and concert versions of the runners-up.

By now interest in the book was making itself felt elsewhere. Carlton Television decided to make a television Drama of the piece, and cast John Thaw to play Mister Tom. When the TV Drama of Goodnight Mister Tom was shown in 1998 it took Carlton by surprise. In spite of the late showing, 14 million viewers tuned in and the phone lines were jammed with callers after the screening. In the following year it scooped 5 awards including a BAFTA. Sadly, shortly after the film was made, John Thaw was diagnosed with cancer and died in 2002.

It was around this time that amateur companies became aware that there was a musical version of the book and between 2002 and 2003, four very different companies put on productions.

In April 2003, in Solihull, 75% of tickets were sold out in advanced bookings before the tickets were even printed. The demand was so high for tickets that it could have run its week twice. In Coventry, so many young people queued up for auditions that the Director decided he would have a bigger cast. The show was such a sell out that even on their notoriously worst night (the second performance) it was still doing 85% business. It was then that Magorian and Carpenter suddenly realised, from the response of the casts and the audiences that the Musical had a new life and that as each company put their own unique stamp on it, the piece not only worked but continued to touch new audiences.

“The Music for Tom‚ was always intended to reference rather than imitate the music of the early 1940’s. This enabled me to use a rich and varied musico/dramatic palette that might avoid sentimental (whilst actively embracing ‘sentiment’) and at the same time permitting the usage of a slightly more spiced harmonic language than one might normally associate with ‘Ambrose and his Orchestra’! Mikki’s characters experience a wide variety of extreme emotions and I felt it crucial to be able to ‘go with them’.
There is one conceit; the character of Zach come from a highly theatrical family, and as we learn, seems to be destined for a career in the theatre himself. I took the liberty of assigning a number of familiar music theatre ‘styles’ to him, both past (his influence) and – as his is all in front of him – future.”