And now for the two adult novels I completed last year, one just before the first lockdown Looking for the Diamond and the other at the end of it, Green For Women. And yes, some of my other novels have led me to write these as well.

I was once asked by someone what my favourite word was and I answered, ‘Nosy.’

In Just Henry, the Mrs Beaumont who had lent Henry a camera, her two adult sons, Oscar and Max, and a family friend not only help Henry and his three friends in 1950 but appear briefly in 1959 in Impossible!  Max works in the film world. Oscar in the jazz world. I wanted to explore where and how that all began. Looking for the Diamond is set in 1929 when their lives are thrown into mayhem after Mrs Beaumont discovers that her rich father in law has plans to remove the roof from over their heads. The family friend, the cook, the two lodgers and their companions from the theatre and film world, an electrician, a handyman extraordinaire and other volunteers, do everything they can to prevent him from doing so, thus causing a series of events which fling them from drama to farce and back again.

And it just so happens, (spoiler alert), that a baby born in this book saves Josie’s life thirty years later in  Impossible!

The seed of Broken Soil began over thirty years ago. After I had finished writing Back Home I wanted to find out more about the WVS. This led me to write a play set in a clothing depot in rural Kent at the time of the flying bombs. But this was in the late nineteen eighties. It was difficult enough for a man to get a new play produced and impossible for a woman, so later I began to turn it into a television series. And then came Housewife 49, a series based on Nella Last’s War adapted by Victoria Wood with a stellar cast. Although my story was set in a different part of England and bore no resemblance to it, I realised that no one would bother to read it and I put it aside.

The WVS ‘in action’
(click on images to see full size)

Later, I found myself being drawn back to it. These women were real to me. Remembering how members of the WVS in London and in Kent had generously shared their experiences with me, I felt I owed it to them to continue and decided to develop it into a novel. Unfortunately, I had to keep putting it aside because of other demands but another new year’s resolution at the beginning of 2020 was to complete it by the end of the year. Lockdown made that possible.

Last year, during the pandemic, the company which had published A Little Love Song, Cuckoo in the Nest, A Spoonful of Jam and Just Henry, was taken over by another publisher, and by the autumn, all four were out of print. Impossible! went out of print this year and my two new novels are now looking for a publisher. At a time when bookshops have had to close during lockdown and the publication of new books has had to be postponed for up to two years, this seems like a disaster but there is another old Chinese saying.

“A problem is a gift in disguise”

The gift is that the three novels which make up The Hollis Family Trilogy can now be published together. Looking for the Diamond and Just Henry can be published side by side and A Little Love Song and Green For Women, about the life changing experiences of women during the second world war can keep each other company.

During the years leading up to the publication of Goodnight Mister Tom and the novels and musicals that have followed, I have met many wonderful people while carrying out research: the cameramen, John Wiles and John McCallum, the projectionist Barry Wilson, Sir Sydney Samuelson who after sharing his experiences with me showed me how Henry could unload an old camera and reload it in pitch darkness, the men and women who were at school together in the 1940’s, John Budd who worked on steam trains in the 1950’s, the men and women who shared their experiences of returning to war torn England after having lived in America, the actors and actresses and the lighting technician who had worked in the theatre in the 1940’s, Anthony Caplen, who as a young man had worked as an electrician in gas lit houses, Adrian Heighes, a plasterer who gave me more information in five minutes than a week of trawling through the internet, Joz Joslin who helped me understand River Police procedure, a sailing instructor, the people who shared their memories of school days at Italia Conti in the fifties, some of the cast (including Sheila Hancock) who had appeared in a new musical called Make me an Offer, directed by Joan Littlewood in 1959, and the people I met when Goodnight Mister Tom, Back Home and Just Henry were adapted for television and Back Home was serialised for Radio 4.

And then there were the places in which I found myself: Dartington School in Devon, a library in Connecticut, a second hand book shop in Hay on Wye, the National Railway Museum in York followed by a journey in The Flying Scotsman, The Theatre Royal Stratford East where I was taken on a guided tour by the actor and theatre archivist Murray Melvin who not only allowed me to interview him but who also made it possible for me to interview another member of the cast, Harry Green. There were the people at the Colindale Newspaper library in London and the newspaper library in Portsmouth where I was able to browse through old newspapers in the flesh. In other words, in paper form. And talking of paper, there have of course been all the lovely letters I have received over the years from people of all ages. 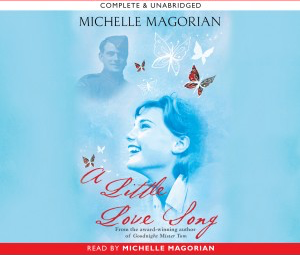 Four of my novels are now on Audible: Just Henry is read by the actor Richard Mitchley. The full version of Goodnight Mister Tom is read by the actor Christopher Saul for the RNIB, an adapted version is read by Patrick Malahide. And A Little Love Song and Back Home by me. I would love to be the reader for Looking for the Diamond and confess that I have occasionally been rehearsing scenes from it, when taking a break from my back log of paperwork.

So, what else am I up to now? Fortunately, before the corona virus pandemic, I had already collected films and books in preparation for a new novel. And yes, I already know who my main character is. In fact, I’ve known her for some time.

And lately I have found myself thinking of some crazy lyrics for a new song.

There’s no hope is there?

Extraordinary to think, in this 40th anniversary year, (which I still can’t get my head around), that it all began with me daydreaming about green and brown, two of the colours mentioned in a song about a coat of many colours.

A 40th Anniversary In Lockdown – Time for more Novels