Cuckoo In The Nest 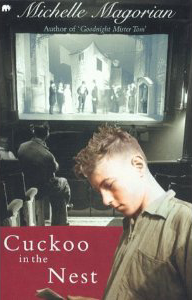 All Ralph has ever wanted is to be in the theatre, but in a working class family in the aftermath of the Second World War, such desires are looked on with suspicion.

Everything is against him: his prejudiced, misguided father, his stressed mother, his poverty-stricken background and his lack of training. But Ralph is determined, and the sheer grit that he has inherited from his father puts his dream within reach.

Can it also give him the courage to seize it?

CUCKOO IN THE NEST – REVIEWS

” Michelle Magorian’s Cuckoo in the Nest is the spirit of immediate post-war Britain, well evoked in this satisfyingly long novel. If J.B.Priestley had written a teenage story the result could well have been something like this. Sixteen-year old Ralph wants to work in the theatre but his authoritarian working-class father will have nothing of it. They fight their battles over the heads of mum, siblings, aunt and cousin all squeezed into a tiny house left behind in a bomb-damaged street.

Outside it rains and snows; within, domestic tensions provide different storms. The one beacon of light is the local repertory theatre where Ralph gets a job as a scene-shifter and occasional actor.

This is a book for the holidays: big, packed with detail and gratifyingly emotional in its ending. It would make an excellent serial for such family viewing that still survives on television.”

“I must confess to starting Cuckoo in the Nest by Michelle Magorian with a sense of disappointment just because it was not Goodnight Mister Tom, her novel for slightly younger children about a wartime evacuee, which for me is one of the best children’s books ever written. It also doesn’t help that this is a novel (a thumping great tome in fact) about a working-class boy’s determination to work in the theatre: written by an ex-actress, you think it is bound to appeal only to similar fledgling luvvies.

But such is Magorian’s power as a storyteller that she weaves even the most reluctant thespian under her spell, vividly evoking the 1940’s setting without resorting to planting period details in the text. Teenagers accustomed to the thin gruel of contemporary fiction aimed at them will enjoy this meaty story of Ralph’s struggle to win over his father who will have no son of his mixing with “pansies.”

“Set in post-war Britain, in austere and class-ridden times, this book tells the story of Ralph Hollis, a working class boy who has returned from evacuation and a grammar school education in Cornwall, better educated and with wider aspirations than the rest of his family. He wants to go into the theatre, but his father, who works in a mill, despises him and his new ways. A fascinating story and a vivid picture of England in the 1940’s.”

“Set in the austerity of post-war Britain, Michelle Magorian’s Cuckoo in the Nest tells the story of a young working class boy who is intent on becoming an actor. Ralph has to overcome both the prejudices if his father and the lack of interest of the manager at his local theatre. Behind the conflicts in the book is a vivid picture of the conditions of the late 1940’s: food and fuel shortages, harsh winters and the difficulties some people had in adapting to normal life after the war.”

“This engaging after-the-war growing up thread is real rites of passage stuff for Ralph, a misfit at home where his one-dimensional working class Dad rages against his theatrical ambitions, and working class and out of place at the theatre where the blinkers are de rigueur also. Luckily, Ralph is as stubborn as those around him and stands up to be counted on all fronts.”

“… the lovingly created tale of a theatre during the winter of 1946-7 with working class Ralph struggling to get a break as an actor. It’s very enjoyable and the lives of the family and the day-to-day work on the productions are finely detailed. It is, in many ways, its own play, full of drama, pathos and grand scenes, dominated by heroes threatened briefly by villains.”