The photographs I have chosen in the gallery below focus on a handful of years when I was in my late twenties to show the wide range of people I was expected to play at one particular time in my life. They are in the order I played them so that you can see how I was expected to step out of the shoes of a young Nottingham woman in A Collier’s Friday Night and into the shoes of a middle-aged cockney in My Fair Lady, a flamboyant French milliner in Italian Straw Hat and a tramp in Shaw’s Major Barbara.

My fellow performers and I fitted meals, laundry and learning lines around our packed six-day and six-night week.  When we walked on stage, whether we were ill or grieving the death of a loved one, we gave the best performance of our lives to an auditorium full of strangers before returning home to our often dodgy ‘digs’.

The older performers had worked in the world of weekly and fortnightly rep and this led me to write Cuckoo In the Nest, A Spoonful of Jam and Impossible! The first two are set in the winter and summer of 1947, the new one in 1959.

My thanks go to the wonderful photographers – Nicholas Toyne, Bryan J. Douglas F.R.P.S. Willoughby Gullachsen and Tom Busby. One photographer didn’t write his or her name at the back of their photographs so I was unable to trace him or her. Whoever you are – additional thanks.

Michelle Magorian
(my stage name for acting is Mikki Magorian) 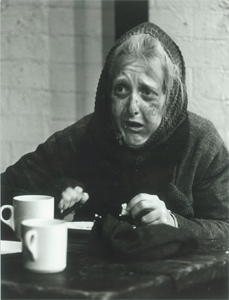