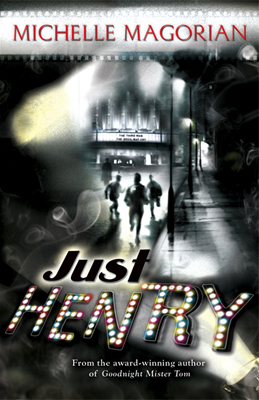 The Second World War has ended but Henry is fighting his own battles….He misses his father who died a war hero, and his only distraction is the cinema. But everything is about to change….When Henry develops an old camera film he uncovers a mystery, and events spiral until his life resembles the drama of the big screen.

Like a bomb waiting to explode, Henry’s discovery will shatter his world.

“This novel transported me to another age with utter conviction.  I couldn’t stop reading it. Great pageturning, storytelling and warm vivid characters.“

What Age Is Just Henry Aimed At?

“One evening while waiting at a small railway station accompanied by my younger son, the kind of station where if you screamed no one would hear your cries, I noticed we had company, a tall young man in a hoodie who kept himself to himself. He was sitting on a bench under the shelter. When the train pulled in we stepped into different carriages.

Imagine my surprise, when just as I was about to get off, I heard someone call out and I turned to find the young man heading in my direction.

‘Are you the person who wrote Just Henry?’ he asked.

He didn’t look too happy about it.

He looked me in the eye and said, ‘so, what age is it supposed to be for?’

He gave a relieved smile.

‘Because I really liked it!’

After the Christmas showing of the film version I was told that people were having difficulty finding a copy. While out shopping a man stopped me in the street. He had been trying to buy one for his wife without success and she was now running out of patience, refusing to believe that he couldn’t find it. I immediaitely dropped into my nearest Waterstones. Eventually, in utter disbelief, I found it in the 9-12 section. For those still hunting for it, that is where you will probably find it. If you’re a teenager, don’t be put off my someone else’s decision to put it there. When I wrote the story I was living with two teenage boys at the time. My sons.

So I don’t think I’m that out of touch. However, if you are younger and you enjoy it too then naturally I will be delighted!”