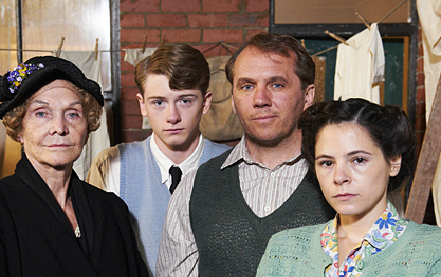 Michelle Magorian is one of Britain’s most popular authors and it is no surprise that some of her finest works have been dramatized on TV. Inspector Morse actor John Thaw was among the stars who brought Goodnight Mr Tom to life in 1998 and on Sunday 18 December, fans of Michelle’s work can see Just Henry on ITV.

As with Goodnight Mr Tom, ITV have spared no expense in assembling an all-star line up for Just Henry that includes Sheila Hancock, Dean Andrews and Elaine Cassidy.

Michelle very kindly agreed to talk to Best British TV about the book, the show and her other work.

“It helps that I wrote the Book and Lyrics for a musical version of Goodnight Mister Tom some years ago with the composer Gary Carpenter. I had to decide what to keep in and what to leave out and occasionally I had to create one person by combining two. During a conversation with the screenwriter of the TV Drama , Brian Finch, and knowing he would have to write extra scenes for William’s mother, I admitted to him that I was worried she would be portrayed as the wicked witch of the west when she was really a frightened, mentally ill woman who had no one to turn to. In the musical, I was able to show her state of mind in the two songs I wrote for her. ‘Send them to me,’ he said.

I was also extremely lucky to have my second book Back Home made into a TV Drama in 1989 starring Hayley Mills. The man who wrote it (David Wood) very kindly sent me drafts of the screenplay and kept me in touch with what was going on. His version of Back Home won an American award. I’m happy to say that this is now available on DVD HERE. The co-producer is British as is the cast, (aside from the lovely, young Hayley Carr), the director, production team and crew. I have to admit I wasn’t too happy about another TV version of Back Home. Sections of it were written behind the script writer’s back and included scenes which could in no way happen during that period but we’ll skim over that and move on, as they say.

With Just Henry I was extremely lucky to have another wonderful writer adapt it, Michael Chaplin. He was asked to turn a 700 plus page book into a 90 minute script. This is like asking a composer to write a short arrangement based on a symphony with fewer instruments, and with his own creative input, produce a new piece of work. There is the novel. There is the book. Both related. Both different. But double enjoyment I hope. It also has a wonderful cast.”