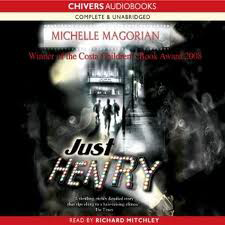 A note from Michelle:

“Just Henry is no longer published by Egmont books, as their teenage and young adult section leans towards contemporary fiction rather than novels set in the past. For those who have watched the TV adaptation or the DVD and who would like to ‘read’ the uncut version there is a highly recommended and wonderful reading of it by the actor Richard Mitchley which can be borrowed from your library through, for example “Borrow Box”.

Richard is a wonderful actor and also runs guided walking tours of Wales as you can see from his website!

Here are some reviews for the Audio Version of Just Henry:

– a thrilling, richly detailed story that rips along to a hair rising climax – The Times

Just Henry is a tight mix of visits to the cinema, spy story, thriller, kidnap yarn and mystery tale. But it is also about teenagers struggling to achieve their dreams – a pacy and emotional story – Young Post.


I was completely unaware how long this book was (I read it on my kindle) but I did know it was aimed at children as I have read Magorian’s two previous excellent novels – Back Home and Goodnight Mister Tom.

This is the story of Henry, just Henry because as we discover throughout the story he is coming to terms with not being who he thought he was a Dodge and then a Carpenter, growing up with one ideal and heroic view of life and his past only to see it shatter in front of his very eyes and a new future build in front of him with far reaching consequences.

Henry lives with his mother, his half-sister Molly and his `Uncle’ Bill. Also residing in the front room is Gran, the mother of his lost heroic father who died saving Private Jeffries. Gran is the one who is keeping Henry’s father alive and making sure that he leads a life his father wanted. This has isolated Henry and when a new school teacher, Mr Finch makes him work with two what his Gran calls undesirables, Jeffries (whose father is a deserter) and Pip (who is illegitimate) Henry has to face a lot of prejudices all of them born from himself.

Through the medium of post war Britain trying to recover Magorian creates a world where we learn about the bomb sites which are picked over by the local children, what was left from destruction by the bombing, rationing is still on and everyone is trying to make do and mend five years after the war has ended. Magorian uses cinemas and films to unite all the youngsters and the adults in the film.

This is where there is no class divide, where it does not matter about your parentage but where everyone enjoys the images on the screen. The choice of films and cinemas is in abundance and where showings are followed by smaller films, newsreels, cartoons and then the big feature again. To enable Henry to watch all these films he needs to have someone take him into the cinema, in the days when just asking an adult in the queue was common. This is how Henry meets Mrs Beaumont and his life and all those he knows changes.

Mrs Beaumont is the guardian angel of this story, her position, her knowledge; the people she knows and her home are open to all regardless of their background, their position, their knowledge and where they live. Some might say you have to suspend belief that this woman just seemed to have the money and wherewithal to help but actually it does not matter all it does is enhance the story.
What is created in a book which draws you in within about twenty pages and has everything that you could possibly want in a novel, romance, crime, a thriller element and justice and a happy ending.

For adults read this book, you would not know you were reading something which is pitched at children. For children I think if they have tackled the large volumes of Harry Potter then this (and Magorian’s other novels) could be easily absorbed and enjoyed by them and they would be learning about history probably without even reading it. A book to be read out aloud together and then read alone to enjoy more and more.


An excellent, meaty story that hits all the right buttons. With a detailed late 40s setting and the kind of plot that works like a detective story mixed with a family saga, this novel for children makes for gripping reading.

Henry is coming to the end of his school life at the Secondary Modern he made sure he got into. This year things are different: Mr Finch, the new teacher, is using project work and presentations instead of the usual boring teaching of facts. Henry will be able to show his project work on films, his favourite subject. The trouble is he will have to work with Pop and Jeffries, both of whom are not the “right” kind of boys.

If it weren’t for his gran, then Henry’s home life would be awful, what with his mean stepfather and annoying half-sister. If only his dad hadn’t died.

As 1949 turns into 1950 the boy has some serious lessons to learn, not least of which is that things are not always what they seem.

The story cleverly details the attitudes of the time and how warped they were from our point of view while making the point that in some ways those attitudes are still around. The reader grows with Henry in his perception of the adult world.

The book will encourage young readers to question their own views while being involved in a really good story. Michelle Magorian uses the structure and style of books from that period and shifts the sensibilities for a modern audience. Great stuff.


While on vacation in the UK last summer I was excited to see the new book by Michelle Magorian. I had recently read and enjoyed Goodnight Mr. Tom so I picked up her new book without hesitation. My time with this book was one of the most satisfying reading experiences in recent memory. This is not a children’s book which only children will enjoy.

Henry is a 14-year old boy living in post WWII England. (1949). He lives in a world of poverty and prejudice and, as the story begins, Henry is as hateful and prejudiced as everyone else around him. His father died during the war while saving the life of a comrade and Henry now lives with his mother, step father, half sister and his paternal grandmother. He is a sad, conflicted, hate filled and very lonely boy who finds solace in going to the movies. Movies for Henry are an escape, a way to leave his own life behind and enter, for a short time a new world. As the story develops the function of movies in Henrys life changes often. They start as an escape and end up becoming a destination of sorts. From being an escape from reality to actually being his reality. Just one of the many ironies weaved throughout the plot. This book has it all. Secrets, mysteries, friendship, adventure, fear, love and what might be the most black-hearted grandmother in literature.

I could write so much more about this wonderful book but not without giving away some spoilers, and I hate it when spoilers are part of a review.

I give this book my highest recommendation. There is no one I know who would not enjoy this.


I ordered this after reading a glowing review of “Just Henry” in the Guardian, and they were spot on! It’s an exciting story, jam-packed with adventure. I’m an adult who enjoys reading children’s books, and I couldn’t put it down–I read it at home, on the bus, at lunch, and even, toward the end, sneak-read it at my desk at work! (I haven’t’ done that since the last Connie Willis novel, “Passage,” came out.)

Henry is a 14-year old boy in post-WWII Britain. He lives under the misguided influence of his grandmother; he has no friends, misses his war-hero father, and resents his stepfather and stepsister. He goes through a great deal of heartbreak and danger as he comes to important realizations about himself and the world, solving mysteries about his past and becoming part of a community–all against a backdrop of the films he constantly goes to see. But that hardly sums up what a rich and thoughtful story it is; it’s full of drama, intrigue, humor, sadness…pretty much everything.

I’d highly recommend this for both children and adults. It’s fast-paced and full of warm, believable characters. And the author is good at portraying the excitement people felt when movies like “On the Town,” “Rome: Open City,” or “The Third Man” were just coming out. It makes me want to rent them and try to look at them not as classics but as fresh new features. In the meantime, I’ll be looking for more books by this author.


Michelle Magorian has the gift of being able to create a complete, detailed world that will pull you right back to 1949 along with the characters.
Every character is complete, there are no shadowed people to fill in spaces – you can feel their lives being lived away from the story. As for the story – don’t expect to be able to put this one down quickly. You’ll be telling yourself “just one more page” but you’ll know it’s going to be more than that.
In short, a brilliantly gripping story for teens and adults (I’m 33) alike, and surely up to the usual excellence expected from the author.