By David Wood from the novel by Michelle Magorian

THE SUNDAY TIMES – PICK OF THE DAY 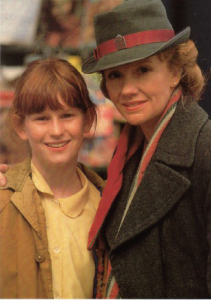 “It’s just about the most enjoyable film I have ever made.” Hayley Mills A movie length costume drama, set in post-war Britain, whose theme is the bursting of the country’s balloon of euphoria after the victory of 1945. The story focuses on the re-gathering of a family who have spent the war years scattered around the world. Hopes of a happy reunion are dashed by the state of the nation, bomb sites and rationing and by a mutual sense of horror at each other’s change of personality. Mum (Hayley Mills) is wearing trousers and smoking cigarettes; dad (Rupert Frazer) appears to be traumatised in Burma; grandma (Jean Anderson) is doggedly refusing to accept any household changes and, to cap it all, the young Rusty (Hayley Carr) returns from America a brash, outspoken child to whom traditional English reserve is a thing of the pre-war past. (Michelle’s note: The 1989 version of Back Home came out on July 23rd. By an extraordinary coincidence the programme shown before it was ‘Home to Roost’. Two people in the cast were to appear in further dramatisations of my work; John Thaw as Tom in Goodnight Mister Tom and Joan Blackham as the headmistress Miss Bembridge in a second version of Back Home.) 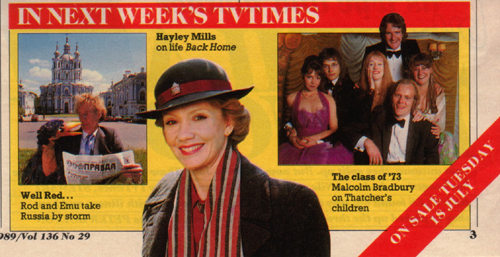 (An extracts from an interview with Hayley Mills)

ITV – Home is where the Love is

‘Home‘, says Hayley Mills, ‘is where you hang your dressing gown. It’s where you put up your own pictures. Above all, it’s where the love is’ Hayley Mills should know. When she was a child she moved home 21 times – and that didn’t count the hotels she stayed in while she was making films. She’s 43 now and has teenage boys of her own. Still she’s making her home where the love is. At the moment, it happens to be an 18th century house in Middlesex. She sits on the winter-cold set of Back Home, looking a little like her own mother, Mary Hayley Bell – in the fashions of 1945, muffled into a camouflage jacket for warmth and with a padded modern anorak over her knees. The subject under discussion is change – change in people, in ways of life, in attitudes. ‘The story is set in 1945 just after the war has ended,’ she says. ‘Everybody’s coming back home. Rusty, the little English girl who was evacuated to America, her father, who’s been in Burma for the past five years, and her mother, Peggy (played by Hayley), who is coming home to grandmother’s house, where they all used to live together. ‘Nothing is the same. Rusty has begun to feel, look and sound like she’s American. Peggy was expecting her daughter to come back home and say: ” Hello Mummy!” not: “Hi Mom!” ‘Her grandmother doesn’t expect Peggy to have changed – but in the war she’s had to. She’s been an ambulance driver, she’s learned to drive and service trucks, she wears trousers and smokes cigarettes. Her husband wants to come back and find everything as he left it and it simply isn’t. He just isn’t the same person himself.’ ‘The process of growing up, then, is going to be very difficult for Rusty -played by American actress Hayley Carr, who was named after Hayley Mills, and Hayley Senior understands why. Growing up wasn’t such an easy process for her, either. Half the time she was a normal British girl, attending an elite boarding school and doing exams; the rest of the time she was a child film star, accustomed, since she appeared with her father, John, in Tiger Bay at the age of 12, to working for her living. As a result she was signed up by Disney and spent her teenage years commuting across the Atlantic to make films such as The Parent Trap (a second sequel, The Parent Trap 111 is on its way) and In Search of the Castaways. ‘I think America does give you a sense of personal expansion,’ she admits, considering her words carefully. ‘ I wasn’t exactly like Rusty. I went to Hollywood to make films but I always came back home.’

Memories of Hayley’s own film career came flooding back when she began work on ” Back Home”, in which she plays the mother of a young girl who returns to England after being evacuated to the United States during the war. The young American actress who plays the girl is herself a big fan of Hayley and is even named after her – Hayley Carr. To avoid confusion on the set they were referred to as Big Hayley and Little Hayley. “She was a joy to work with,” recalls Big Hayley.” She is twelve and reminded me of myself at that age, making my way in an exciting career. Of ” Back Home” she says, “It’s just about the most enjoyable film I have ever made.”