“Michelle Magorian gets right under the skin of her protagonists and makes you experience what they are feeling in a way which stays with you long after the book is finished.”
The Telegraph

Three stories from the collection of short stories were dramatised as the Afternoon Play for Radio 4 in 1999 by Malcolm McKee who also composed the music. It was directed by Sue Wilson.

‘ A trio of dramatised short stories linked by the theme of water are centred around a storm at sea, a devastating flood and a boat race – three teenagers are challenged by the power of water.‘ 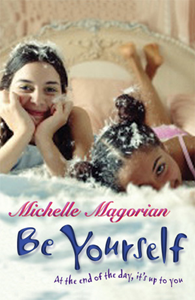 Author’s note: These three stories came out in a collection called In Deep Water but this is now out of print. However, two of the stories, which were broadcast, appear in Be Yourself. This is a collection of past stories and one new one. The picture of the jacket is on the website with the novels. Although there is a lovely picture of two girls on it, most of the stories are about boys.

The new story, ‘Sorry!’ is a correspondence between two cousins who need someone to complain to about their terrible parents. One has a mother who is so house proud that her son is convinced she hoovers the toothbrushes and the other cousin has a father who obsessively collects junk.

IN DEEP WATER – WHAT THE CRITICS SAID:

“Michelle Magorian is best known for her wonderful novel Goodnight Mister Tom, recently dramatised on TV (with John Thaw). She writes stories that skilfully mingle escapism with reality and appeal to adults and children alike. In Deep Water showcases three of her short tales, linked by the theme of water. In each one, a teenager is challenged by the power of water – in a flood, in a gruelling boat race and out on a storm-tossed sea. Director Sue Wilson places the action in a vividly detailed soundscape of wind and wave, splashes and gurgles and all things watery. You might find yourself reaching for your sou’wester as you listen.”


“Three short stories, variations on the theme of water by Michelle Magorian, dramatised by Malcolm Mackee. Imagine a storm at sea, a catastrophic flood and a boat race and let your imagination help paint the rest.”

“Michelle Magorian, winner of the ‘ Guardian Fiction Award’ for Goodnight Mister Tom, explores the theme of water in a trio of short stories broadcast in Afternoon Play – In deep Water. The first and most riveting, follows a Yorkshire family on the run from a flood which has already devastated their own home and is still rising. A young pianist, Kathy, is particularly concerned about the watery fate of her piano and sheet music but when she finally returns to the house, she finds that the piano has been far from idle in her absence…The second and third of Magorian’s atmospheric stories concern a tense boat race and a terrifying storm at sea.”

‘Waiting for Peace’ in War: Stories of Conflict
Macmillan 2005
Compiled and edited by Michael Morpurgo

Nicholas Tucker in the INDEPENDENT – July 7th 2005
A sensitive collection for the children of an uncertain world
WAR:STORIES OF CONFLICT
Edited by Michael Morpurgo
MACMILLAN CHILDREN’S BOOKS

“Now that the Geneva Convention seems a dead letter, no one of any age can feel safe in warfare. This collection of stories focuses on such hard truths rather than the simple-minded heroics that marked children’s war books of old. There are fine stories about fighting in Iraq (Celia Rees) and conflict in Palestine (Elizabeth Laird), but it’s still the Second World War to which most writers turn. Only Geraldine McCaughrean, as always, steps away, to the Crusades. Otherwise, Hitler remains synonymous with history for young readers. That said, there are some remarkable offerings on this theme, particularly from older authors who were there. Nina Bawden writes beautifully about an Italian prisoner working on a farm. Eva Ibbotson is equally impressive. Her tender story features a refugee child who prefers to stay with the family who looked after her rather than return home in 1945. Both stories have a ring of truth, drawing on autobiography. The editor, Michael Morpurgo, writes a fine story about facial disfigurement, a topic not featured in most lavishly illustrated war books. The most disturbing piece is not a story at all. Written by the late Robert Westall, it describes his military service, in Egypt during the Suez War of 1956. As he puts it: I shall always be grateful for my tiny war, because it led me into wickedness. If a writer doesn’t understand wickedness from the inside, he’s only half a writer, and all his villains will be cardboard cut-outs The wickedness refers to the behaviour of some National Servicemen who nearly massacred a village after their lorry got stuck behind a flock of sheep. Panicking about what looked like an ambush, an already half-mad gunner opened up indiscriminately. The gun jammed and no one was killed. But Westall remembers how he did nothing to stop the man. How many soldiers in Iraq today will have had a similar experience. Only two stories don’t work. The rest, recognising that war is now a crossover experience, appeal to adult and child readers alike. Some are briefly introduced by their authors, others speak for themselves. There are lighter moments: Michelle Magorian recalls repertory theatre in 1945 and George Layton looks back wryly at the experience of a boy sent to a children’s home in Morecombe to put on more weight. This collection is just the thing for readers looking for something a bit different from the latest instalment of magical fantasy.”

‘The Front Room’ in They Wait and Other Stories
Pepper Press 1983
Compiled by Lance Salway, illustrated by Jill Bennet

‘The Smile’ in Love Them, Hate Them
Methuen Children’s Books 1991
Edited by Tony Bradman
Swedish Radio – 2005

In Deep Water
Viking 1992
A collection of short stories about water and the sea.
Dramatised for BBC Radio 4

Be Yourself
Egmont 2003
An inspirational collection of short stories about learning to trust your own identity.