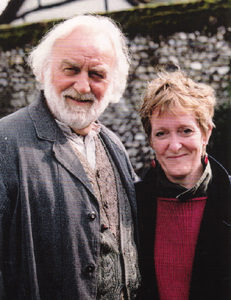 “It’s a pity this war time drama’s being shown at such a late hour, since it’s adapted from a well-known children’s novel and would make perfect teatime viewing. John Thaw takes the lead as the curmudgeonly rural widower Tom Oakley, who’s got Victor Meldrew’s personality and the beard of Uncle Albert from Only Fools and Horses. Although the character is obviously different from Morse and Kavanagh, ‘the beard adds another dimension’ John says. Old Tom is none too pleased to be landed with a young boy evacuated form Blitz-torn London during the War, but there are nice surprises ahead in this shamelessly heart-warming drama.
Maybe it’s because he plays his characters with a certain endearing grumpiness that you somehow imagine John Thaw is going to be equally bad-tempered. He’s not. There’s a relaxed warmth and gentleness that is quite a surprise from the actor renowned for playing tough cookies like Jack Regan of The Sweeney and Inspector Morse. ‘I do have my grumpy moments if things aren’t going very well. But I’m no more grumpy than anyone else’ he says, pouring himself a coffee as he eases back into a sofa. There’s nothing forceful or showbizzy about him. He is quietly confident and, if anything, slightly shy. More like a kindly uncle in manner than one of TV’s millionaire actors, his snow-white hair framing his face and his soft blue eyes. If meeting him isn’t surprise enough, his latest ITV role certainly is. Complete with whiskers and a beard, looking not unlike Father Christmas, he stars in Goodnight Mister Tom.

It’s a two-hour wartime drama about a widower, Tom Oakley, whose gentle village life changes radically when he’s forced to take in an emotionally damaged nine-year old evacuee from London’s East End.As Tom, whose own wife and son are dead, takes on the job of improving Willie’s reading ad writing, a bond grows between the child and the old man. It couldn’ be more different from John’s usual on-screen task of tracking down killers, But when he read the story, he was hooked. ‘We’ve all been children and felt unloved and, hopefully, loved. It has universal appeal because in a way, it’s about everyone. It’s about how two people find love and how each is needed by the other. That’s what all human beings crave really. It’s a relationship. And the boy has never had a relationship with his mother. John knows exactly what it’s like to grow up without the love of a mother. When he was only six years old, his mother Dorothy left his father for another man, abandoning him and his brother Raymond, aged five. He was brought up in Manchester by his hardworking lorry driver father, also called John, who died of cancer in 1997 aged 78.”