Thirteen-year old Oscar has been brought home, having been badly injured during his second term at a boarding school. Hardly has he manoeuvred himself through the front door on his crutches, accompanied by his widowed mother, (Hettie Beaumont), and the man he calls Uncle Daniel, when a police constable arrives at the house with disturbing news. His mother’s newest lodger, a Mr Arbuthnot, has been killed in a road accident and two men are waiting outside to remove his papers.

It is only after they have vacated the house that Max, Oscar’s eleven-year-old brother, confesses to their mother that while she was out of the house, he had accidentally discovered Mr Arbuthnot’s diary. This had led him to finding papers belonging to her which he had removed from Mr Arbuthnot’s study and hidden away to show her. This leads her to discovering that her rich father-in-law is plotting to remove the roof from over their heads. Uncle Daniel, their cook, the two lodgers and their companions from the theatre and film world, an electrician, a handyman extraordinaire and other volunteers, do everything they can to prevent him from doing so, thus causing a series of events which fling them from drama to farce and back again.

An Extract from Looking For The Diamond

While Hettie Beaumont, her two sons and Uncle Daniel spend a few days in Paris so that the scene painter friends of one of her lodgers can paint the ground floor walls, Hettie’s brother Matthew, who is attempting to hold the fort, is told by the cook (Mrs Hobbs) and her daughter (Daisy) that he has misread the date on a letter about the visit from Hettie’s upper-class snooty mother-in-law. In fact, she will be arriving that very afternoon. This throws him into a state of alarm as there is no time for the group of actors and actresses who are downstairs in the emptied drawing room to return home, as their faces are covered in an assortment of greasepaint from a make-up class taking place under the newly installed electric light bulbs. And Matthew also needs them to help him speedily carry the animal heads given to Hettie as a wedding present from her father-in-law on her wedding day up the stairs from the basement where she has kept them out of sight.

Once these safari souvenirs of her in-laws are swiftly nailed to the walls in the hall, the actors, actresses and their make-up instructor return swiftly to the drawing room where they push aside the dividing wall and dash into the room behind it, where a life class is happening. Squeezing in between the art students they quickly close the doors behind them as Freddie (one of the actors who that afternoon has learnt to put on make-up suitable for a woman, in case he ever has to play an ugly sister in Cinderella) flies down the stairs to the hall from upstairs where he has been putting on a maid’s uniform just as the bell in the hall announces the arrival of Mrs Beaumont Senior. Once she is greeted at the door, she makes her regal entrance into the house, a fur collar crawling up her neck, accompanied by an elegantly dressed female companion, and is suitably enchanted by the sight of the animal heads on display. But she is on a mission. Ignoring a suggestion from Matthew that she should return to visit the house at a later date when the house and the gas lights are not undergoing a spring clean, which explains why they are using candles (which is a lie, as it’s really to hide the fact that the house is being electrified) she and her companion sweep into the drawing room followed by Matthew. 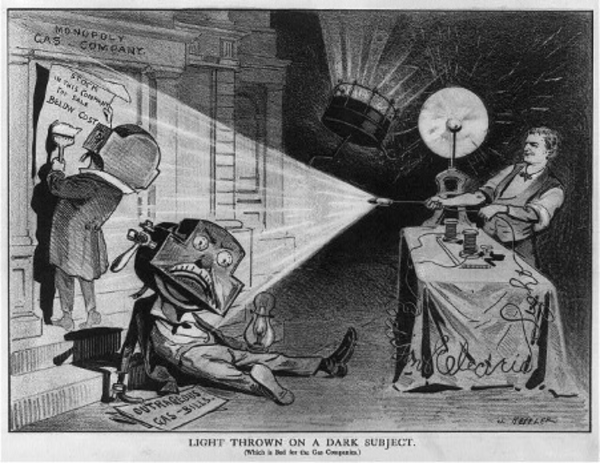 ‘But it’s completely empty,’ she cried. ‘There aren’t even any rugs or curtains.’

While they were examining the room, Freddie tiptoed across the hall and joined Daisy.

‘Did you have time to tell Frank to stay out of the way?’ he whispered urgently.

‘Let’s hope he doesn’t want to try out any of his experiments while they’re here.’

‘Lovely decor,’ they heard her companion exclaim. ‘Pity we can only see it by candlelight.’

‘Ask one of her servants to hold one of the candelabras so that we can see the room behind those doors,’ Daisy overheard her demanding.

‘No need to do that, your ladyship,’ said Matthew hurriedly dashing across the floor. He picked up the candelabra on the left of the mantelpiece and walked briskly through the doorway to the hall. ‘This really is a wasted journey,’ he declared over his shoulder. ‘ I’m sure Henrietta would be delighted to have you visit her in a fortnight after her return from France.’

But Mrs Beaumont Senior, having grown impatient at being kept waiting, had already picked up the other candelabra and was marching with grim determination towards the dividing doors, which were now beginning to give way under the strain of the occupants huddled behind them. Hardly had she touched them than they flew aside, revealing by the flickering candlelight, a large portly man who was naked but for sketch books and hats of every size and fashion held strategically by a group of strangers underneath his very sizeable stomach.

Mrs Beaumont Senior and her companion gave a loud scream. As the doors drew wider apart they then found themselves staring at brown, white, purple, wrinkled and monstrous faces. The owners of these faces were now tumbling forward in their direction.

They backed into the room screaming even louder. Mrs Beaumont Senior reached out for what she had supposed was a large poker from the fireplace. Gripping it firmly she raised it in defiance and shook it wildly at them only to discover that she was waving the old artificial leg that belonged to Uncle Daniel. She dropped it with a shriek and scuttled towards the door where she met Freddie.

‘Does your mistress have any inkling as to what is going on here?’

While Freddie was struggling to find some feasible explanation and Matthew was holding the candelabra with lighted candles over his head, Frank and Ben were eagerly creeping along the landing towards the stairs which led to the hall, carrying a bag of cannon balls and a metal sheet. Unbeknown to Matthew and Freddie, Frank had planned not only to show Ben how to produce the noise of thunder but he also thought it might be fun to see if the people in the house could be fooled into thinking there was a real storm approaching. As they reached the top of the stairs Frank was surprised to see candlelight below but decided to ask questions later.

‘And will you at least have the courtesy of giving me your name,’ demanded Mrs Beaumont Senior, staring furiously into Freddie’s eyes.

‘Are you telling me that the mistress of this house addresses a maid by her surname?’

‘That is correct Ma’am. She don’t like addressing me by my Christian name.’

‘Absurd! I have never heard anything so ridiculous!’ she spluttered. ‘Tell me your Christian name, immediately.’

He took a deep breath.

This was followed by a thundering crash as the metal sheet was shaken vigorously. The candles flickered, and as the cannonballs clattered noisily down the metal chute that Frank had earlier wedged down the side of the staircase, they were bombarded by the sound of an approaching hurricane. The two women clutched one another and screamed even louder.

And that’s when the heads began to fall off the walls.”

Looking For The Diamond

Thirteen-year old Oscar has been brought home, having been badly injured during his second term at a boarding school. Hardly has he manoeuvred himself through the front door on his crutches, accompanied by his widowed mother, (Hettie Beaumont), and the man he calls Uncle Daniel, when a police constable arrives at the house with disturbing news. His mother’s newest lodger, a Mr Arbuthnot, has been killed in a road accident and two men are waiting outside to remove his papers.

It is only after they have vacated the house that Max, Oscar’s eleven-year-old brother, confesses to their mother that while she was out of the house, he had accidentally discovered Mr Arbuthnot’s diary. This had led him to finding papers belonging to her which he had removed from Mr Arbuthnot’s study and hidden to show her.

The diary reveals that Mr Arbuthnot was not only a spy but had also been taking instructions from her father in law who is intent on finding reasons why he can remove her from her home. The following evening, she holds a meeting with Max and Oscar, Uncle Daniel, the two remaining lodgers and the cook. Taking the lodgers and the cook into her confidence, and having read what Mr Arbuthnot has written about them, she asks them to put their lies on the table. But first she exposes her own lie, which is, that she is not the housekeeper but the owner of the badly leaking property. After revealing their own lies, the lodgers and the cook, relieved that she doesn’t want them to leave, vow to do whatever they can to help her prevent this man from taking the roof from over their heads.

Later, while Max is in bed, Oscar informs his mother that another lie should have been put on the table. His injuries, he reveals, were not caused by an accident but had been inflicted on him by the other boys who had been bullying him relentlessly for months. By now, his mother has discovered that the document which stated it had been her late husband’s wish that their sons should attend this school was a forgery, and that a sum of money which had been left to her, had been stolen from her by her father-in-law to pay the fees, thus forcing Oscar to attend an establishment his father had hated. Armed with this knowledge, she is determined to find a way of preventing Oscar from returning there.

Through a winter under heavy snow, a summer of floods and an autumn heatwave, Oscar and Max, Uncle Daniel, the lodgers and their theatre friends, a tiler and his son, an electrician, a rescued girl, Max’s tutor, and their Uncle Matthew, do everything they can, to prevent this powerful relative from taking her home away from her.

Events swing from drama to farce and back again, interrupted by a visit to Paris and a seaside town, as a whirlwind of people sweep into her life, eager to help. While continuing to look for the diamond amongst each new disaster, she returns to earning her living under a pseudonym again, her older son discovers the world of jazz and her younger son discovers life through a lens.

For more information about LOOKING FOR A DIAMOND, please contact:

Agent for teenage and adult novels

The Hollis Family Trilogy:
Cuckoo in the Nest, A Spoonful of Jam and Impossible!
Looking for the Diamond and Just Henry
A Little Love Song and Broken Soil

Tags: Looking For The Diamond