A group of women find ways to survive and help others under skies ravaged by London-bound V1and V2 rockets. A young girl, kidnapped by a highly respected member of the WVS, is thrown into their midst and changes their lives in ways they could never have imagined.

(Although they made every effort to trace the copyright owners of the illustrations, this was not always possible and they have apologised for any inadvertent neglect of copyright acknowledgement).

An Extract from Green For Women

“An old ruddy-faced man was standing on the pavement holding a large notice beside an open truck. It was for farm workers going to Kent. Phyllis remembered having heard that they were extremely short of helpers that year because of the flying bombs. Seated on folded blankets in the back of the truck were a group of women of all ages holding bundles and bags and it was clear from the way they chatted amongst themselves that they knew each other well. Phyllis tried to gain their attention.

‘Excuse me,’ she said. ‘Is this truck going anywhere near Ashford?’

‘Where you from, love?’ asked a woman sitting next to her.

‘You wantin’ farm work?’ interrupted the man with the notice.

‘Hop on, love. The farmers ain’t so fussy, ‘cos they need all the ‘elp they can git. If it weren’t for them Land Army girls, they wouldn’t be able to cope at all but they’re still cryin’ out for more people to help out, and they’ll pay you.’

One of the women leaned over the end of the truck and held out her hand.

‘Our nippers have been sent up north to get away from the bombin,’ she said. ‘Fancy you comin’ all the way dahn ‘ere.’

‘In you get, ducks,’ said her friend, and the two of them hauled her in. She moved close to them and sat down.

She prayed they wouldn’t ask her any awkward questions and was impatient for the truck to move. As soon as it began to judder out of London she rested her head on a pile of sacking and closed her eyes. 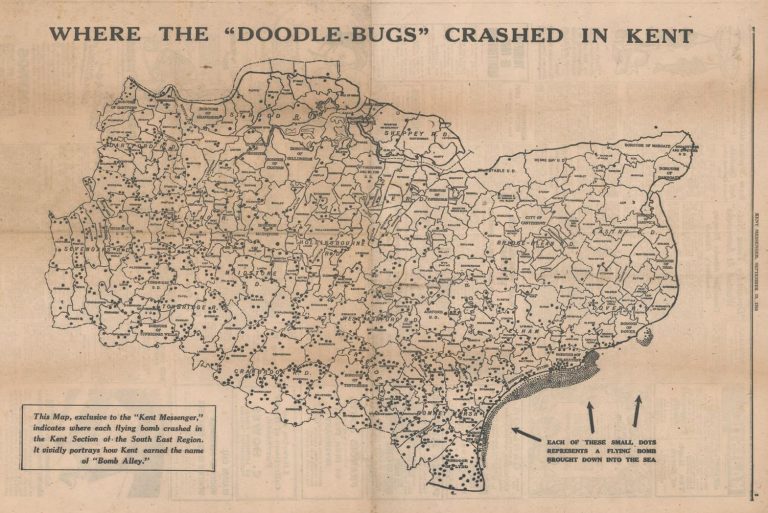 At first, she thought it was the sound of a motorcycle which had woken her and was about to go back to sleep when she realised it was a flying bomb and that someone was shaking her.

‘Under the truck, quick!’ yelled a voice.

Once her feet had hit the lane she found herself wobbling as though drunk, and was surprised to find herself staring down at a valley of fields with long lines of neat clumps of wheat where Land Army girls in khaki jodhpurs or rolled up shorts were working. In the distance stood a grand and very beautiful Victorian mansion.

She felt one of her hands being gripped. Within minutes she was dragged beneath the truck and found herself lying alongside the other women and the truck driver, with her hands over her head while what seemed like an entire squadron of doodlebugs rattled noisily above them. This was accompanied by continuous gun fire, a loud thud and an explosion which caused the truck above their heads to rock from side to side.

After a while, they crawled out and gazed down at the valley. The field was empty but Phyllis could just make out some of the women crouching in trenches at the side of it. Beyond them was a white mist. And then Phyllis realised that the mist was all that remained of the mansion.

Leaning lopsided on a gate further along the lane was a large notice. The truck driver picked it up and stuck it back into the ground. It read FARM WORKERS NEEDED.

‘Tough,’ said one of the women. ‘I’m goin’ ‘ome. At least they ‘ave proper shelters there.’ And she clambered back onto the truck, followed swiftly by the other women, leaving Phyllis on her own in the lane.

‘For what they’re payin’ they can sing fer it,’ yelled the woman to the driver. She peered down at Phyllis and stretched out her arm for her to take. ‘Come on, love. You go back to Leeds. You’ll be safer there.’

‘Don’t be daft,’ yelled another.

Phyllis shook her head and watched the truck slowly reverse. It was only when they were out of sight, that she realised she had forgotten to ask the driver where she was, but she had a pretty shrewd idea she was back in Kent. She turned and stumbled forwards.

She walked all day, praying that she would see someone, but no bicycles or vehicles passed her by, and of course there were no signposts. What gave her the strength to keep going was the knowledge that with every step she took, she was getting further away from her mother. She prayed she would meet someone before it grew dark as she knew the lanes would be pitch black by night time and it would be like walking blindfolded.”

London. June 1944. Hattie Heatherton, a member of the Women’s Voluntary Service, is on her way to a railway station when a bomb explodes. Spotting an injured WVS member in the debris, she runs to her aid. The dying woman asks Hattie to take her daughter away from her father, informing her that all the necessary documents and ration books needed for her evacuation are in her handbag. Hattie reluctantly promises to do so. However, being a law- abiding citizen she has no intention of keeping her word until she witnesses the father’s abusive behaviour. She kidnaps the thirteen-year old Izzy, and takes her back to Kent, where V1 rockets are already filling the skies.

Once Hattie has found a billet for her, she promises that every Friday they will meet for a chat in case anything is worrying or upsetting her. By now, Izzy is convinced that members of the WVS rescue everyone, so when she has to move from one billet to another, she reveals what is going on behind each new door, in the belief that Hattie can rescue even more people.

Which is how Hattie finds about a young woman from Leeds who is fleeing from her past and her suffocating mother, and discovers the hidden talent of another woman who is treated like a servant by her in-laws, as well as the whereabouts of a dangerous Spark plug.

It is only after the war that Hattie and the woman who has now taken Izzy under her wing, cheerfully admit that Izzy’s ‘interference’ has given them, and the other women, the strength to change. Hattie reminds her friend that if Izzy’s mother hadn’t joined the WVS, her daughter would never have come into their lives and that there is now one important journey Izzy needs to make.

Accompanying her, they find a way to pay their respects to her mother, completely unaware that by doing so, their action will cause another woman to be rescued. The ‘rescue’ ripples are still spreading outwards and will probably continue to do so.

“My thanks go out to all the women who were in the WVS in Kent during the bombardment of V1’s and V2’s who allowed me to interview them. Special thanks to Matthew McMurray, the Keeper of Heritage at The Royal Voluntary Heritage Collection.
For those who might be interested in this archive click on the link. This will take you to the main history pages of the website and for those who want to know about the work they are doing now, click through to the home page.”