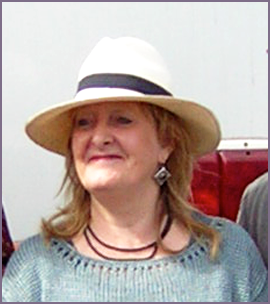 Michelle trained for the theatre at the Rose Bruford College of Speech and Drama in the late sixties and at Marcel Marceau’s L’Ecole Internationale de Mime in Paris. She has a postgraduate Certificate in Film Studies (BFI/London University) and an Honorary Doctorate (Portsmouth University).

Her first novel Goodnight Mister Tom has won awards in the UK, America and Australia and has been translated into eleven languages. It has been read on the radio and as an audio book by Patrick Malahide

As Mikki Magorian she has performed in plays, musicals and one-woman shows, has written lyrics for Gary Carpenter (for the musical version of Goodnight Mister Tom,) Stephen Keeling, Bob Buckley and Alexander L’Estrange. A few years after the musical was performed in Manchester and Ipswich, it was screened on television starring the late John Thaw, winning seven television awards including a BAFTA.

Last year the book celebrated its 30th anniversary and was brought out in a special Puffin edition alongside Back Home. A stage play version of it opened at Chichester Festival Theatre with Oliver Ford Davies as Mister Tom before going on a regional tour.  The cast received wonderful reviews and standing ovations in the fourteen theatres where they appeared. Behind the scenes, the BBC were broadcasting a ten part abridged reading of it on Radio 4 Extra and a four part dramatisation of Back Home while Mikki was commuting to the AudioGO studio in Bath where she was recording a reading of another of her books A Little Love Song. Her other novels are Cuckoo in the Nest, A Spoonful of Jam and Just Henry.

Just Henry (a Costa award winner) was made into a ninety minute drama by ITV Productions last summer with a talented cast including Josh Bolt, Sheila Hancock, Dean Andrews, and Barbara Flynn. It was chosen as one of Radio Times’ 12 Christmas Cracker treats.

An adaptation of Back Home was made for television twice. The first one, starring Hayley Mills won the Gold Award at the New York Film and Television Festival in 1990. The screenplay was written by David Wood who has adapted Goodnight Mister Tom as a straight play.

Michelle has just finished a new book, is carrying out research for an eighth book and is gathering material for performance readings.