In Goodnight Mister Tom, I could have revealed more about William’s mother but decided not to as I felt it would take the attention away from my two main characters. But when it came to writing the Libretto for the musical, I wanted to show that although her behaviour towards William was abusive, she wasn’t an evil person. She was extremely ill but had no one to turn to for help.

In a novel, one can read the thoughts of one’s characters on the page. In a musical, one can hear them through the lyrics. Two songs in the musical reflect her state of mind. I’m Frightened exposes the terror she feels, not only by the change she sees in her son after he has lived with Mister Tom but also her fear that people will discover she is not what she seems. Although she behaves like two completely different people, she has no memory of some of the things she has done but fears she might have committed a terrible sin. She needs her son back home to help her hide her secret, a new born baby.

Her second song is in two parts. If Only and When I was a Little Girl. In If Only she is breaking down. This is followed immediately by When I was a Little Girl which draws her back to her love of the sea but how, after her childhood had been crushed, the sea remained locked inside her. It is now calling her, and it is in the sea that she believes she will find peace and feel no more pain. At the sound of the air raid siren, instead of running for the nearest shelter, she makes her way to the coast and it is there that she walks gratefully into its arms.

Years after this musical had been performed, while waiting to hear if Carlton Television had decided to film Goodnight Mister Tom, the screenwriter Brian Finch and I kept in touch with one another. If I had any news, I would phone him and vice versa. When we heard that the book was definitely going to be made into a film for television, I knew that he would need to write scenes which would reveal more about her state of mind and I told him about the lyrics in the songs from the musical.

But it wasn’t only Mrs Beech that I revealed in the musical. It was also Rachel, the young woman Tom had married and who had died of Scarlatina. In an earlier song, Tom mutters grumpily to himself after having put William to bed:

For it is since her death forty years earlier, that he has become a recluse. 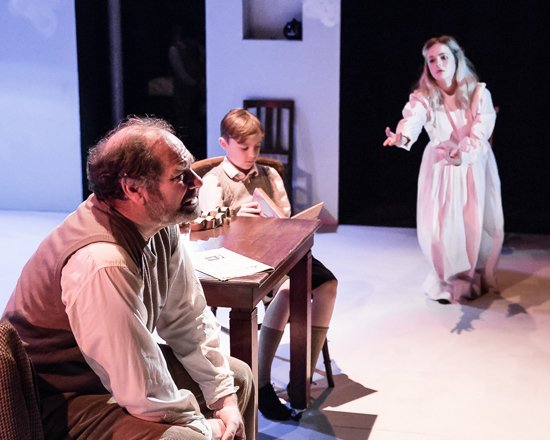 In the musical, Tom occasionally turns to her in his thoughts, and the audience can see her as clearly as he does. In Rachel, he shares his memories of her with William. The lyrics in the song are based on Rachel and the Paint box, a short story I wrote in 1975 about Tom and Rachel’s last few months together. In the past, I have sometimes given copies of this story or the libretto to actors playing Mister Tom to help them when they have been rehearsing the play version, or sent copies to the director.

Returning to the musical, there is a moment when Zach asks Mister Tom what he thinks Rachel would have said after Tom has heard no word from Will for weeks since his return to London. Tom turns to look at the young Rachel standing there.

Late at night on a London bus, we hear Tom’s thoughts in I’ve Missed You, revealing his determination to do so.

And for those who are interested in obtaining a copy of the libretto or on putting on the musical, (Composer: Gary Carpenter), the contact details can also be found in this edition.

For amateur companies who are interested in putting on a production of the musical:

For those wishing to order a copy of the libretto:

For repertory, fringe and West End productions of Goodnight Mister Tom  – The Musical